Any questions? We are here to help via chat, phone or email

This vault has been designed to fit the 2005 to 2015 Toyota Tacoma using true 12 gauge domestic steel. The top plate now fits tighter making a better seal. Made in Texas by Texans. This model is available with several lock options, please choose before adding to cart.

ONLY MANUFACTURER IN THE INDUSTRY WITH A LIFETIME WARRANTY

I installed the Lock'er Down® Console Safe with 4 Digit Combination lock in my 2013 Toyota Tacoma three years ago. Installation was pretty straightforward even though the "instruction" sheet is sparse. It took me about 45 minutes to install it from start to finish. Installation requires removal of the factory console hinged lid. That part of the operation was the trickiest part because of the tiny screws involved, but if you have a decent amount of manual dexterity and are used to do-it-yourself projects, installation should be something most people can accomplish with minimal hassle and tools (a screwdriver and straight-handled socket driver as I recall).

I like the four-number combination lock set up. It seems like it would be difficult for someone to "pick," and four combination wheels mean there are 10,000 possible combinations. That makes it a lot more difficult to pick open than a keyed version would be. When the combination is entered and the knob is turned, the spring-loaded lid opens on its own. It's a nice setup.

The Lock'er Down is well constructed and keeps its contents safe from top and side attacks because it is essentially a full metal box that is inserted inside the console. While I'm sure a determined thief could eventually uninstall the unit by destroying the interior of the vehicle, that prospect makes it enough of a deterrent that most criminals are going to seek easier quarry rather than risk making a lot of noise and commotion trying to defeat the unit, and getting caught in the act. Furthermore, because it's inside the console, most thieves wouldn't even know that it's there to begin with.

One annoyance is that the unit leaves a gap between the safe itself and the outer passenger-side edge of the console. The gap is big enough for pens, change, bullets, keys, and even a tiny flashlight to fall into. Once such items have fallen into this abyss, they are like lost souls who have entered the chasm of Tartarus. In other words, they become irretrievable unless you remove the unit.

While the Lock'er Down does slightly reduce the amount of usable space inside the console, there is still plenty of room inside. People wondering about firearms storage might be interested to know that I can fit an HK45C and two spare magazines inside the unit along with a few other small items. It's not big enough to accommodate most full-size pistols, but subcompact and many compact-sized firearms should easily fit. Of course, it goes without saying that you should unload and clear your firearm before placing it inside, and I always wrap mine in a small cloth to keep it from getting dinged up during insertion or retrieval (the unit is made of hard steel). And personally, I would never rely on the unit for prolonged firearms storage—just on the basis of good judgment, common sense, and the desire to be a responsible firearms owner.

All in all, I would say this is a well designed, well constructed product that is totally worth the money. I am glad to have it installed in my truck and I plan to use it for years to come. I wish the company made these units for many other makes and models of vehicle, such as Subaru.

D
D.S.
I trust this to keep my stuff secure

Super easy to install and very secure! I trust firearms and other valuables in this absolutely. Its a thick gauge steel body and there's no pry points that would make it easy to break. I'm pretty confident in the design. It's better than some of the other console safes on the market as the entire cavity is encased in the steel instead of some others just being a top plate. You remove the armrest, remove the armrest bracket, unbolt two 12mm bolts, drop this in, install the longer included 12mm bolts, and reinstall the armrest stuff. Done. You do lose a little bit of space on the front which is a shame. I feel they could've utilized that empty space. The door is spring hinged and will pop open when you turn the lock to unlock it. The combo dials are pretty good but you will need to actually look at them to unlock it. It's not super quick to enter into.

Two things I added. First I drilled a hole and added a LED light module on the inside of the safe, then wired it to come on when my headlights are on. That way I can see whats inside when it's dark out. Second, I added a "L" bracket and drilled self taps to cover the right edge of the safe. If I ever put small items on top of the safe I didn't want locked, they would roll off that edge and get stuck between the console and the safe. I lost a few lighters there and decided to fix this issue. Other than that, it's perfect. 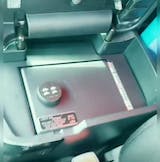 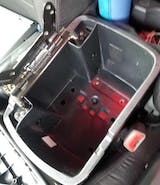 Using this for well over a year, one of the best purchases you can make for your vehicle. Very easy install. Only complaint for Tacoma is there's a gap on one side (outside of the safe where the hump is), behind the hinges of the Tacoma's console, that things can slide behind. I had a gift card and coins sitting on the top of the safe, they fell under the safe, had to uninstall the safe to retrieve, then reinstall the safe. Was my own fault, but I plan on putting some foam in this area to prevent it from happening again.

I usually don't bring much valuables with me, but it's a great peace of mind knowing I can keep some valuables in this safe and not rely upon trying to hide my things elsewhere in my truck. I do outdoor activities that don't always allow me to take all my valuables.

Install was a breeze and you just need to remove the console cover. Bolt it in. You're done. Just make sure to set your code before everything, with nothing inside. I also used some of the packing material to plug the gap on the passenger side of the unit. Things can fall in there and be lost in the void unless you unbolt and remove the safe.

One thing that bothered me was how hard it was to dial in the code when locked. The mechanism would bind the movement of the numbers somehow. So, I ended up taking the lock parts apart and adjusted it a bit. It works great now.

K
K.D.
Seems solid and does what I need it to.

I installed this in my 2011 Tacoma work truck, in order to have an extra secure place for my wallet, house keys, etc while on job sites.
I think it installed easily, to be fair I have a lot of experience with mechanics and trade work, but the entire install only took me about a half hour. It fit well and seems made well and no doubt provides some security against smash and grab type thefts.
The only complaints I have are the lock cylinders/tumblers are a little clunky and it seems they could have made the interior compartment a little larger. This does not hole nearly as much as the factory center console, but overall it is solid and seems well made.
Inside there is room for wallet, keys, small tac flashlight, construction calculator and a larger phone with case, with a little volume to spare, but things will be packed tight